The last thing on the hostel TV last night, after the late night showing of Colombiana, was a brief news report documenting the beginnings of a rise in interest in ornithology in Extremadura. I have to say I’m impressed; surprised and impressed. In my experience of living and working in Spain, the most interest the majority of ‘folk here take in birds is whether or not they go well with olive oil. Spain’s not unique in this regard. As my secondary school Physics teacher once said when I explained the risk the Bristol wind farm posed to migrating waterfowl, ‘if it won’t end up on my plate, I couldn’t give a monkey’s’. And that was in England, the biggest nation of bleeding hearts. Well, here’s a little proof that Spain at least is finally taking a turn for the better.

I’ve got a fairly long wait until the bus home, so I thought I’d take a walk along the Guadiana again whilst I’m here and look across the river to Portugal. The cormorants were out on the rocks with their wings spread wide after a morning’s hunting, so I got my camera out for a few shots with Respighi’s The Pines of Rome playing in my ears. And that’s when I got a tap on the shoulder and a friendly local pointed me in the direction of a grounded vulture on the east bank of the river.

I haven’t power-walked so fast in years. A vulture? Here, in the middle of Badajoz? It sounded too ridiculous a notion to be a lie, so I packed up my gear and left the bridge and the sunning cormorants I was photographing behind in the dust. At first I thought he might have confused buitre with any other large bird – it wouldn’t be the first time – but this just must be my lucky weekend or something, because just a short distance before the second bridge…

…boom. Sulking in the shade of the roadworks with a crowd of five or six startled onlookers. It could hardly be anything else: vultures are bloody huge, even youngsters like this one.

I was worried that it might have a broken wing, as it didn’t seem particularly keen to get back into the air. What it was doing here, bang in the middle of the city, is anyone’s guess. Perhaps it was simply tired. At any rate, it wasn’t all too bothered by the two men who’d gone down to join it, both to have a closer look at something you normally only see high in the sky above, and to ward off any dog-walkers that might cause the bird any further distress. My heart goes out to those two.

I have to admit, I probably won’t ever get a better viewing of a wild vulture than this. Not even in Monfragüe, which is the best place to see them in all of Spain. And here, in Badajoz, of all places! Bonkers. 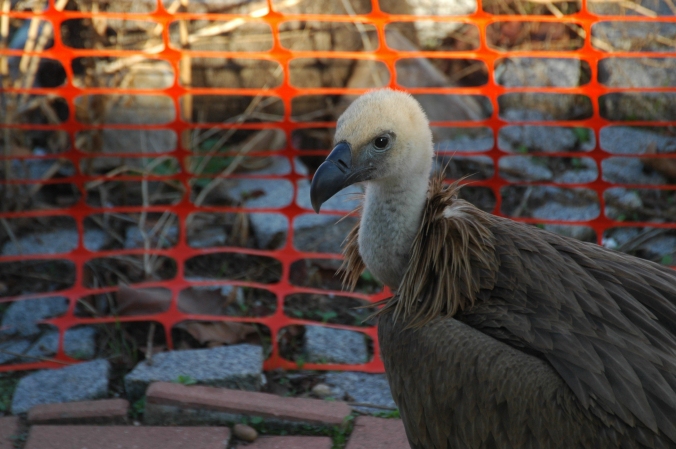 ‘Watch out,’ said one of the onlookers as it came bouncing forward, ‘That thing’s got a beak that can bite through bone.’

To everyone’s relief, there was nothing wrong with it in the end, because after some ten minutes it puffed up its feathers, made a few bounding leaps and took off into the air on two giant wings. It wheeled about over the river and almost flew headlong into the bridge, clearing it by little over a metre or so, and flew off in the direction of Portugal.

Not something you see every day! And now I need to go in search of a USB cable or card reader of some description, because my memory card is chock-full. Well, gallinules, kingfishers, cranes and a griffon vulture, all in twenty-four hours of city-hopping! Now there’s a feathery micro-adventure for you. BB x