It’s over, at last! After almost a month of to-and-froing between school, the ayuntamiento and the Almendralejo police station, I have a Spanish bank account and the admin period is finally at an end. Alright, so there’s still some confusion over whether I really need a Spanish social security number and I’m not entirely sure how to top up my phone since it isn’t compatible with its own network app, but the most important stage (and one that, by the sounds of things, the other assistants accomplished weeks ago) is done and dusted.

So what better way to celebrate than with a little travel?

You see, I adore traveling. I’m sure I didn’t need to tell you that, but I feel like in the three weeks I’ve been here I’ve never had the chance to get out. Not for want of opportunity, of course, but I told myself right at the beginning that I wasn’t to go traveling until I’d finished all the paperwork. That was supposed to be before my (abortive) training course in Cáceres on 1st October. Well, now it’s the 16th. But that’s ok. Villafranca feels like home now, I’ve christened it with my first stupidly long walk, and I have to say I’m quite enjoying being ‘El Inglés’. But I’ve waited long enough, and now here I am in the Plaza Alta in Badajoz, enjoying a ración of some seriously high-quality croquetas as the city wakes up for the night.

A paltry three and a half euros took me all the way to Mérida, the regional capital of Extremadura. It’s also minuscule compared to Badajoz and Cáceres, for which the two provinces of Extremadura are named, which means you can get around the place in a couple of hours. I didn’t plan on staying long, since I only intended to use the city as a launch-pad for getting to Badajoz – there’s only one bus direct from Villafranca and it leaves at nine in the morning – but, as is so often the way of things, Mérida turned out to be a whole lot more than a collection of pristine Roman ruins. 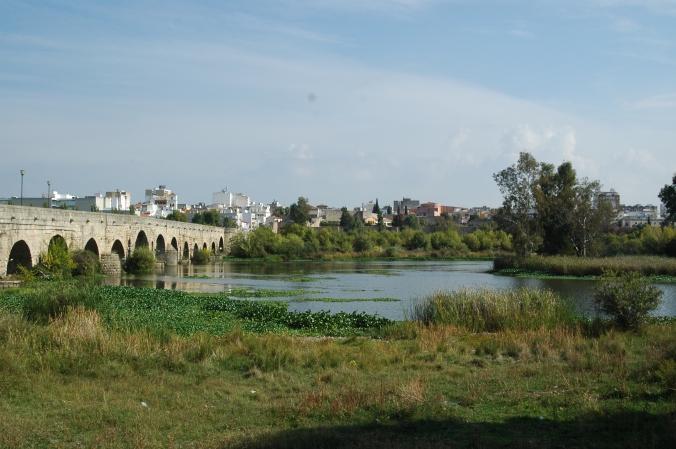 At first glance it looks a lot like Córdoba, with the Roman bridge and the great big river splitting the old town from the new. But then, so does Badajoz. It’s missing the beauty of the mosque, of course, but then, Córdoba is and always will be in a league of its own. What it does have is a spectacular aqueduct on the north side of town. If you see any photos of Mérida, it’s bound to feature in more than one of them. Unlike the one in Segovia the city gave it breathing space and there’s a park around it now, but that hasn’t stopped the storks from taking advantage of all those convenient flat-topped towers. 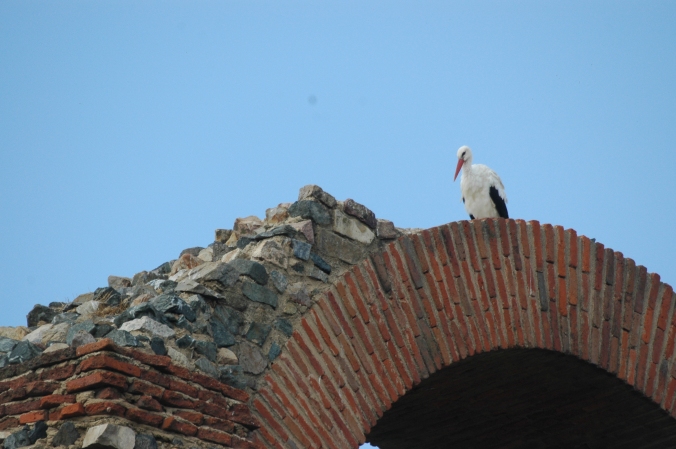 Ah, but I can do better than that. It took me almost half an hour to cross the Roman bridge over the Guadiana this morning, not because of its length – you can span it in five minutes or less at a stride – but because I was held up by two of my favourite little riverside friends, both of them easy to spot because of all the noise they were making.

I haven’t been to Doñana National Park almost every year for the last seven years for nothing, and when I heard a distinctly disgruntled grunting cutting over the babble of an approaching horde of school kids, I was hanging over the side of the bridge and scanning the reeds in a flash; and sure enough, there he was. Old Longshanks himself.

What can I say? Gallinules. Love ’em. Loved the ridiculous things since I first saw a picture of one in a book. The name’s daft enough – Purple Swamp-Hen, in full – but the feet are something else. 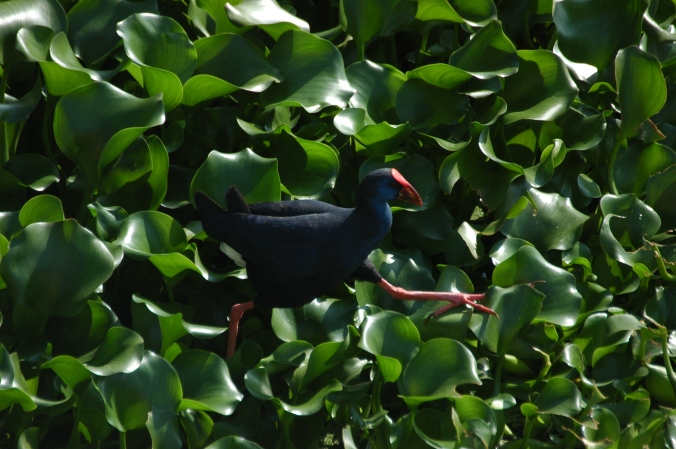 I don’t know why I make such a big deal about gallinules over anything else, but they’ve always been the ultimate Doñana bird for me. Perhaps it’s because it’s basically a giant purple chicken. Mm, close enough.

Feathered friend number two should be a lot more familiar to most of you. He’s also rather colourful, but a heck of a lot smaller and shinier to boot. And once you know what they sound like, you’ll see a lot more of them. It’s a kingfisher, of course!

At least, I hope you know what a kingfisher is. Nobody here does. Not even if I give them the equally impressive Spanish name of martin pescador. 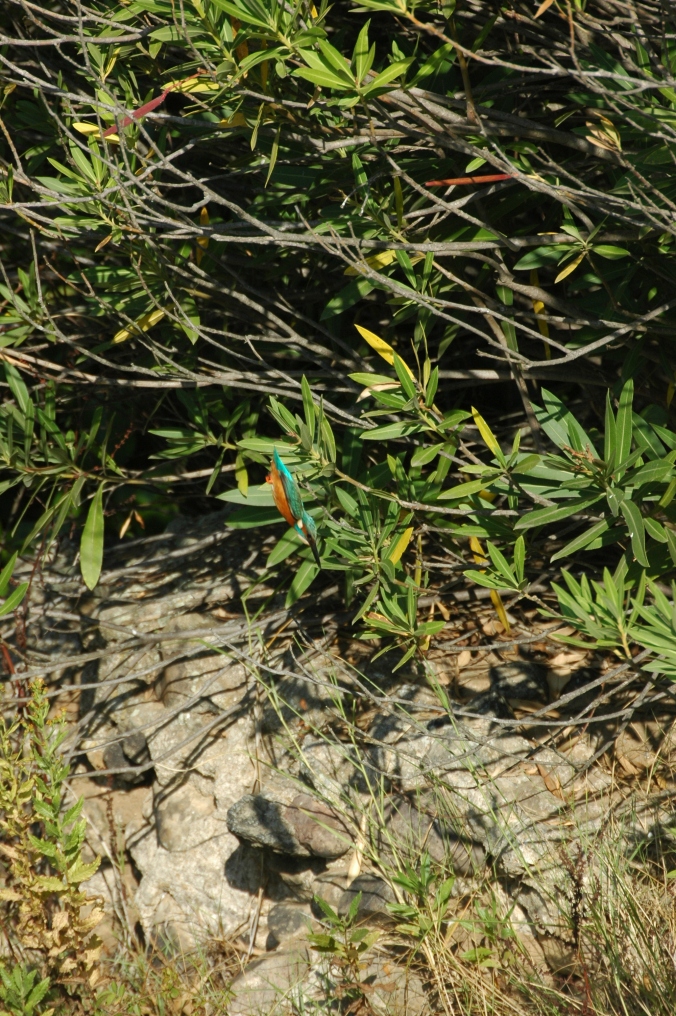 I’m still waiting on that perfect kingfisher photo. The one everyone wants: wings spread wide, water droplets falling from a dive, fish in beak etc. but until that moment, they’re always a pleasure to watch. 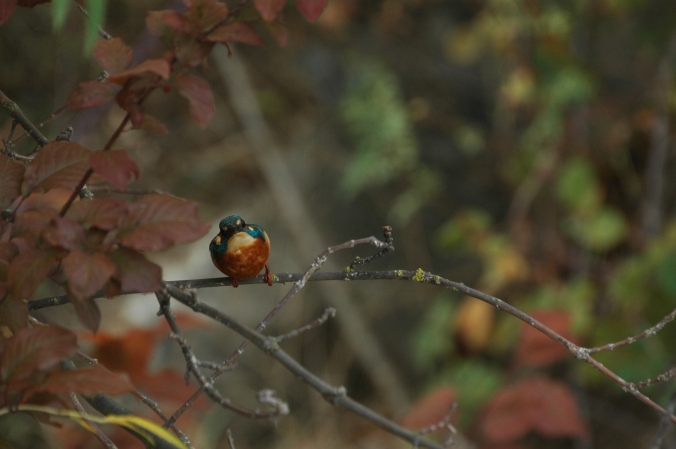 Everybody else was walking on by and doubtless wondering who that young loony was in the maroon hoodie-and-chinos combo with the ridiculous lens, hanging half over the bridge, but hey, I was having a good time. That’s my idea of a morning well spent, anyway.

Sheesh, long post. My travelogues usually are. Badajoz is rather beautiful, and if my right thigh weren’t still punishing me for that 45km cross-country hike last weekend, I’d probably be enjoying it more. I could do with a rest. It’s a lot bigger than Mérida and I had to double the distance when it turned out that the albergue I had in mind was a school groups affair. I was accosted outside by three young girls who asked me if I wanted a blowjob and called out ‘oyé, feo’ and ‘mochila verde’ after me when I ignored them. Then I tried taking a shortcut through the park into the Alcazaba, but shortcuts do tend to make long delays, and in this case the road came to a sudden and unexpected end. The door was there alright, but the road… wasn’t.

The adventures never end! Left the restaurant to soak up the night in the square and a wandering troupe of musicians asked me for directions to the ayuntamiento. I pointed them in the right direction, but their leader deduced that I clearly wasn’t from Badajoz. Back atcha, tío; ‘I’m from Villafranca de los Barros’. ‘Villafranca?! Hombre, somos de Ribera!’ (the next town along from VdB). It’s a small world. And I’ve just noticed that I missed a major performance from the best gypsy musicians of Badajoz at the theatre tonight. Only two doors down from the hostel, as well. Rats. I’ll be back.

I’d better call it a night there and head on back to the hostel. I might try for sunrise over the Guadiana after this evening’s gorgeous Portuguese sunset. On a final note, I had the happiest moment of the month on the road to Badajoz when I saw, in the distance, a giant V-flock of some one hundred and twenty cranes on their way south. It’s only the very moment I’ve been waiting for, the first true sign of winter in Extremadura. I was practically jumping out of my seat, I was so happy.

The photo hardly does it justice, so I’ll go hunting for them some other time when I’m not stuck on a bus. But that’s an adventure for another day. BB, which may or may not stand for Bird-Brain amongst other things, signing out x