‘Americans no. Only Arabs for this bus. No Americans.’ The man behind the JETT bus service desk looks peeved enough as it is to be stuck with an afternoon shift on Eid, so I guess a disheveled tourist with a ludicrously hopeful grin asking for the Tuesday bus to Cairo came at a bit of a bad time. Pointing out that I’m British probably wouldn’t help either.

When I first saw that there was a bus that ran from Amman to Cairo a couple of weeks ago I suggested jokily to Andrew that we pop down to Egypt for a few days after Ramadan. It was just a flight of fancy – but as so often happens with me and flights of fancy, it got all too tempting and I shamelessly threw myself at the idea. I mean, who wouldn’t go now, with almost all foreigners out of the country, to see the pyramids, the Sphinx and the Cairene citadel without the hordes of camera-touting tourists? There’s a clue in there that I missed somehow, but I was blinded by desire, I guess. Andrew was never fully behind the idea, thinking it (rationally) a little too radical a move, so it came as something of a relief to him when we were told that the Cairo bus was an Arabs-only bus. It makes sense, I suppose, but it’s a bit galling. By hook or by crook I’ll get there somehow, but I guess the pyramids will just have to wait for the time being. Heck, they’ve lasted a good two thousand years, they can wait another two or three years more. Damned white people problems. Now more than ever do I wish I could have a vaguely Arab countenance, if just to blend in and disappear in this busy, busy world.

Superficial rant over. In a similar vein, we took a trip to Wadi Mujib this morning. It’s a nature reserve of sorts – the fan-tailed ravens, Tristram’s starlings and blue-cheeked bee-eaters weren’t exactly making themselves scarce – but it’s more of an adventure park, and everything that entails. Don’t get me wrong, it was serious fun, clambering through rushing torrents and grazing my arms over a sharp gravel riverbed whilst floating on my back downstream to the Dead Sea. It just wasn’t what I was expecting, is all. If you’ve been to Petra before (I haven’t – yet) and took the Siq trail to the treasury, imagine that but flooded. With rapids. I even ticked off a bucket list number by finally getting the chance to meditate under a waterfall, of all things. I can’t recommend it for peace of mind – it feels like a hundred fists raining down on your head and shoulders at once and you can’t open your eyes for a second – but with all the roaring and crashing water overhead it’s an unparalleled way to shut out the world completely. Focus, man. You should try it sometime.

Craziest of all was having my camera and several other electronics in a bag around my waist throughout. If it wasn’t waterproof they’d have all been wrecked. Focus sure helped me to forget about that. That, and the horde of nigh-on thirty Vietnamese tourists that came charging into the canyon after us, iPhones in plastic sleeves around their necks. No selfie sticks, though. Even in Jordan, there’s no escaping the stereotype.

So yeah. A very white start to the weekend. As for what the rest of this week entails, well, now Cairo’s off the cards, who knows? I’ll keep the rest of the deck close to my chest for the time being. Until the next time, ma’ as-salaama! BB x 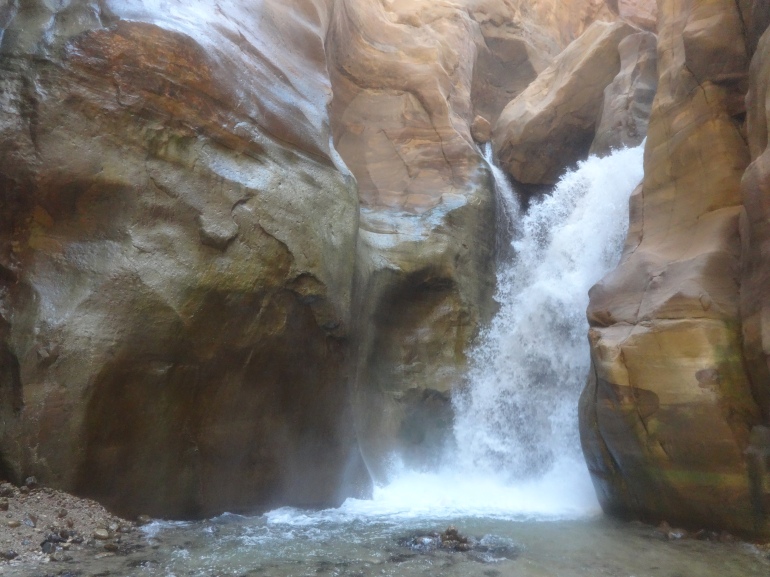