Two seasons of Doctor Who in as many weeks. That’s getting dangerously close to an addiction. Fortunately, it was as much a memory run as it was a time-filler; the buck stops with the last of the Tennant episodes. For some reason I never got into the Matt Smith series. Maybe I grew up.

If my last post made it sound like Eid was one long endurance test in the kitchen, this one ought to shed some light on the matter. If the truth be told, I spent both Eid itself and the following day very much out and about, purposefully burning off any and all calories gained over the weekend. With all those sugary Ramadan sweets, I had plenty of energy to burn.

True to form, I messed up. The calories got burned, well and truly, but so did my back, my neck and my legs. Talk about splash damage. But when splash damage comes in the form of an entire day on the shores of the Mediterranean, who’s really complaining?

I confess, beach days are not really my idea of a day well spent, but for once it was nice just to kick back and relax by the sea, happy in the knowledge that last week’s conundrum was, finally, resolved. 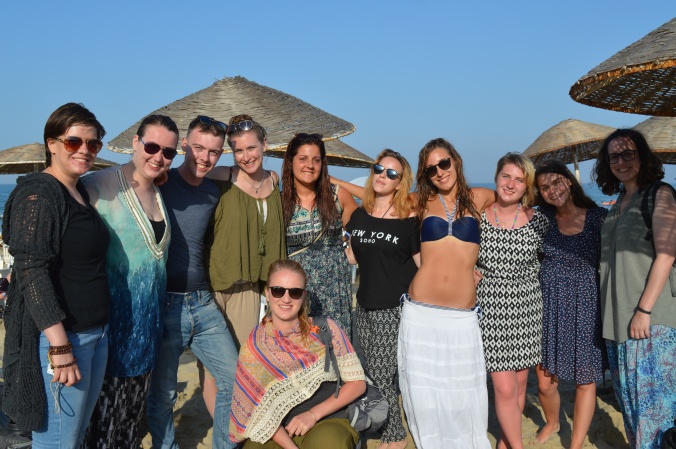 Spot the Italians (hint: it’s got something to do with the Sun)

The Dar Loughat team has exploded from six to eighteen over the last week. The result is that the gatherings have got louder, cheaper and perhaps a little less personal. And perhaps for that reason I’ve been pulling away a bit this week, loner that I am. Curiously enough, that led me to spend the day after Eid with the Host. I didn’t have much of an idea as to what, where or why. The father simply knocked on my door in the morning and asked if I was coming with them. He didn’t say where. But aren’t they the very best of plans: the one that you have no idea about?

The destination, as it turned out, was Moulay Abdessalam, a holy site and place of pilgrimage for the Sufis of Morocco, sat high atop a mountain in the Bouhachem range. If I hadn’t twigged that I was in Africa yet, I certainly did when I saw the shrine. At the top of a flight of rock-cut steps, the shrine – a small white building with a green door cut into the side – seemed to grow out of the rock, sheltering a huge cork-oak sprouting from its centre. The floor, too holy for human feet, was nailed down with smooth cork-oak bark, and men walked to and fro across it barefoot, chanting and praying and bowing before the tree. It was mystical enough a spectacle, but add to that the swirling mists, sometimes thick enough to obscure everything ten metres away and more from sight, and it was almost otherworldly.

I suppose cameras aren’t particularly acceptable in such situations – I’m still stinging from that run-in with a couple of camera-fearing Chaouenis back in May – so I contented myself with a distant shot and resorted to sketching it instead, though how that is a less offensive practise than photography continues to escape me.

Continue up the mountainside a little way and you come to a telegraph mast, from which one of the locals willingly leads you to a metre-long fissure in the rock. According to local tradition, the rock is a test: those who can pass through the fissure will be blessed, and those who cannot will be cursed. Something like that, anyway. The words bendito and maldito were clear enough. As for the test itself, it revolves more around technique than skill: the nature of the fissure is such that there is a way to get through, though it requires keen observation and no small amount of manoeuvring. 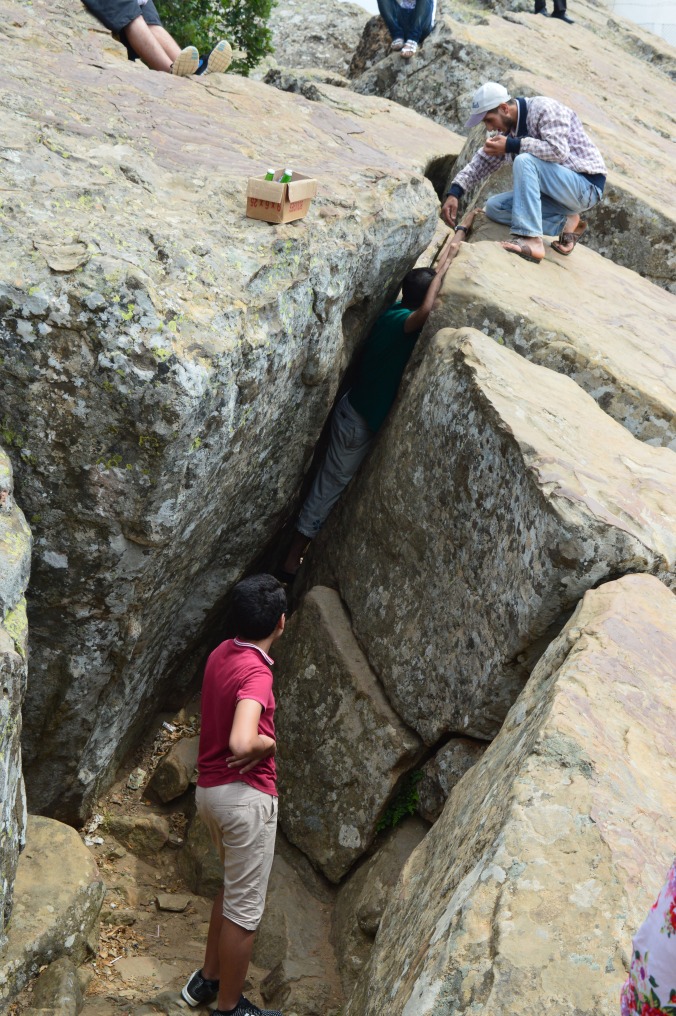 Yours truly made the cut in less than a minute. I put that down to a staunch refusal to grow fat on Moroccan cuisine than any skilful footwork on my part, though I have to say it seems a rather sexist challenge: I just about managed to squeeze through with the rocks grazing my back and chest. Any amount of gym, good eating or femininity and you’d have no hope in hell. I’m blessed, then – but at what cost, I wonder? 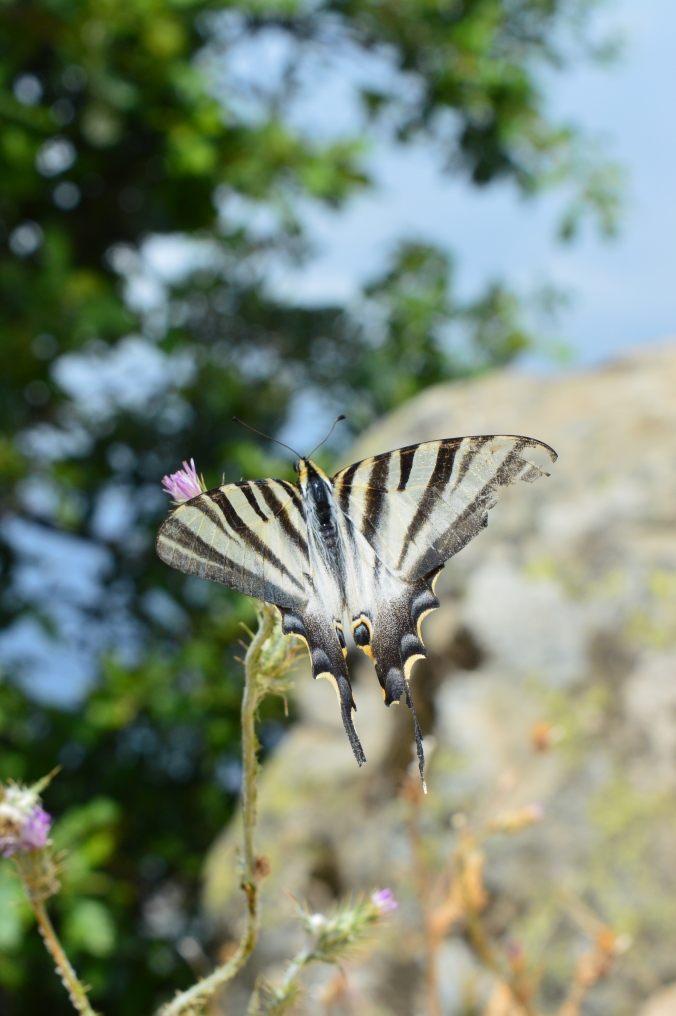 We stopped on the way back to fill up on fresh water from for a sacred spring. To dispel any myths there, we were filling up industrial-sized plastic water bottles by the bootload, although I did suffer to drink straight from the well by means of a smoothed-out bark ‘cup’, as Moses and his followers might have done in the stories of old. Pretentious, much, but I was loving every second of it.

How to drink, oldie-worldie style

We took a late lunch in the misty forests. I was in one of my strange, quiet moods and contented myself with watching the mists swirling through the trees. It was a pretty magical sight. This time last year I was dodging traffic, crawling into a hole with Henry Rider Haggard and steadily losing my mind in the dusty streets of 40ºC Amman. To think that at the same time of year I could be standing in a cold, misty forest with the wind in my hair and the sound of birdsong… It’s everything I wanted and more. Morocco, you’ve done me such wonders. Thank you.

Africa, forest, mists, but no gorillas (there might be some macaques about, though)

Everybody’s heading out today; half for the mountains, half for the beach. As for me, I’ll be staying right here. Our Fes plans fell through due to illness, which isn’t so bad a thing, as I have a lot of work to do today. Essays – the bane of our lives. The sooner I’ve got some more of this work done, the sooner I can get back to enjoying my time out here. A target language research project is all well and good for assessing one’s advancement in a language, but it doesn’t half cast a shadow over your enjoyment of the year abroad. Just a thought, and not even mine, but one I adhere to. Katie certainly had the right idea there.

Well, three weeks remain. This time in three weeks I’ll be on a plane bound for Madrid, and then for home. But whilst it’s the end of the story for me, the story is just beginning for so many others (ugh, how crass a line is that). So, whilst you’re here, don’t forget to see how things are going on with fellow bloggers Alice Abroad and the dream-team at Langlesby Travels. Doesn’t everybody need a breath of fresh air from time to time? Blogging can seem a pretty solitary activity, but in actual fact it brings you so much closer to people by opening a window on a world you might never have seen before. It also keeps your writing muscles very well flexed. As an exercise, I couldn’t recommend it more highly. Which is odd, really, because I don’t go in for recommending exercise as a rule.

Until the next time, I’ll try to keep you posted as often as I can. The end is so near I can taste it, but I’m not about to lose sight of the goal with the final line in sight. Let’s smash these last three weeks, ya3ni. Positive attitude, that’s what it’s all about. That’s what it’s always about. BB x

One thought on “Time Lords and Holy Water”