There are some places that you come across that feature on almost everybody’s wish list. The pyramids of Giza, the lost city of Machu Picchu and the Great Wall of China, the name a few of the standout examples. Ask for more and you might encounter a few more classics, like New York’s Central Park and the bustling canals of Venice. Extend the list a little further and you’ll probably find a small Moroccan town nestled deep in the Rif mountains of some forty thousand inhabitants. Why? Because a large part of the old town is painted powder blue. Introducing Chefchaouen, the blue pearl of Morocco.

I should point out, it’s currently under scaffolding in anticipation of its upcoming designation as a UNESCO World Heritage site. Just like the Fes tanneries last year, that’s another visit hamstrung by the UNESCO beetles. Fortunately, I’ll be a mere hour away all summer, so I’ll be back when they’re done. It promises to be spectacular.

It’s a strange experience, wandering along an entirely blue street. The whole medina looks like something out of a picture book. You can almost hear the suspicious mutterings of the locals when the first travelers stumbled upon the town a century or so ago; a four hundred-year old refuge from the zealous rage of Castile. There are some doorways and passages that are instantly recognizable from the travel guides and Instagram accounts, and with good reason: they practically scream out for a photo.

And that’s where the trouble begins.

Chefchaouen is, at the same time, a photographer’s dream and nightmare. Not only have you got some of the most beautiful colours to play around with that architecture can provide, but the villagers themselves are extremely photogenic and set off any street scene like saffron – if you feel like risking it. 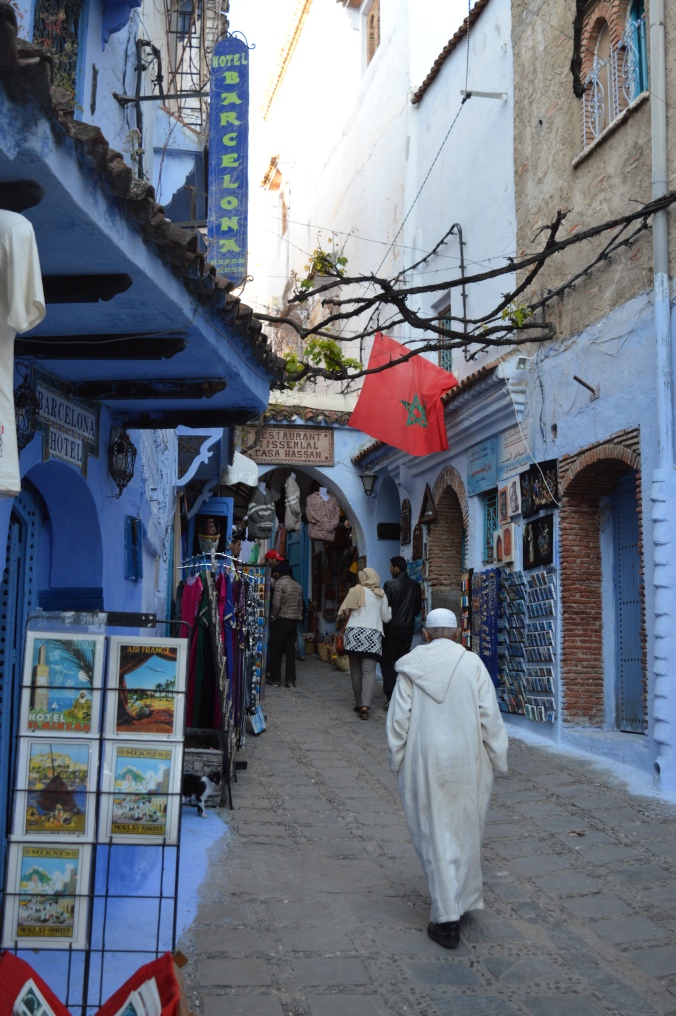 Chaouen has been in the mainstream tourist trade for some five years now and it’s inhabitants have had plenty of time to develop their own opinions about being posted all over the global social media on a daily basis. Being the cautious type, I’d rather avoid trouble and settle for those unoriginal empty street shots, taking proper dioramas only when all backs are turned. But even that, it seems, is sometimes a little too much to ask.

‘No photos! No photos!’ cries an old woman, rounding a corner just as I press down the shutter on what was mere seconds previously an empty street. I hastily stow away my camera as she grumbles to herself in Arabic about the likelihood of it cropping up on Facebook tomorrow morning. True to self, I’m left feeling so guilty for taking that snap one second too late that I end up doing the rest of Chaouen sans apareil. Thanks for that, jaddatii.

A common joke bandied about by Moroccans – aimed almost exclusively at people like me, I shouldn’t doubt – is the ‘no paranoia’ jibe, reserved for all those travelers who assume indifference when hailed in the street. I had this two or three times after my run-in with the camera-shy abuela, when I bemused a few stallholders by passing by a gorgeous Chaoueni door without reaching for my camera.

I tried my luck again the following morning, having recovered from that little stumble, only to run into exactly the same problem when I was quite innocently photographing a lantern. ‘No! No!’ says a villager, climbing the stairs towards me. ‘No photos!’. Jesus, Chaouen, what am I allowed to photograph?

The result? I spent the entire day sketching instead.

Sketching appears to be harmless. I’m not entirely sure what the difference is between a sketch and a photograph – a true craftsman puts just as much work into both – but people don’t seem to mind you standing on a street corner and scribbling away for twenty minutes or so. You’d think after a couple of minutes that it’s fairly obvious that you’re the subject of a doodle when the artist in question keeps stealing a casual glance over your shoulder to the mountains behind, and that that might bother some folks… but apparently not. It even has curious passers-by stop and talk to you.

Perhaps that easily-offended old Chaoueni did me a good turn after all. It’s all too easy to become lost behind a camera.

I have mixed feelings about Chaouen. On the one hand I do admit that it is rather gorgeous, as Moroccan towns go. For me it’s not a scratch on the more authentic Taroudant or Imoulas, but that has more to do with the thriving tourist traffic than the town itself. My main problem with it, it must be said, is what I term the Petra effect: when something receives so much hype that the reality can’t help but disappoint. It’s unfair to say that you shouldn’t rave about an especially beautiful place, but sometimes I’d rather make my own discovery than find the path trodden down before me by the world entire and the locals already soured by thousands of camera-toting holiday-makers. One almost misses the hippies. 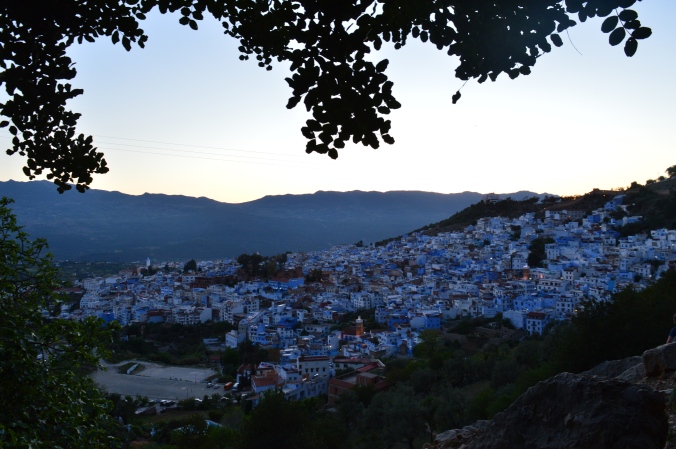 Like Petra before it, I’d heard so very many enticing anecdotes and seen so many beautiful photos of Chaouen that I wasn’t as bowled over as I probably should have been. I will, however, be back. There’s more to the town than I had time to see… and I have all summer. BB x

2 thoughts on “Chaouen and the Petra Effect”